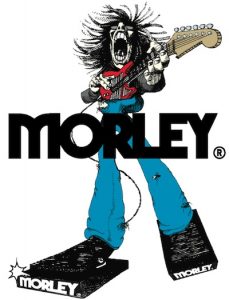 Morley makes some awesome wah pedals. Here are a few that we recommend:

They also make some awesome custom signature versions just for some of the most famous guitarists:

The history of the Morley Guitar Effect company starts with two brothers, Raymond Lubow and Marvin Lubow, in the 60s. They were the pioneers of the Morley line of guitar pedals used widely today. The Morley pedal has a unique design that gives it an advantage over other guitar pedals.

It is this ingenious design that made the Morley Pedals famous in the 60’s. The pedals were an improvement of earlier sound effects devices known as the echo units. The echo units replaced the unreliable tape recorders and echo chambers of the time. Guitarist could now tailor their own sound effects on the stop with the echo device.

The Adineko pedal became popular in the music scene. Fender approached the Raymond Lubow to design a custom Adineko pedal for them. Simultaneously, Raymond Lubow was working on another device that mimicked the Leslie rotating speaker. The Lubow brother joked that theirs was not a Leslie (Less Lee) but a better version known as More Lee. This was the birth of the name Morley.

Morley pedals were easy to recognize. They had a bigger housing made of chrome-plate and rubber. This oversized look never bothered sound engineers at all. They still loved the crisp sounds and rugged look of the Morley Pedals from the 60s. The large housing design became a signature look for the succeeding Morley sound effect products. It was even used in the pedal version of the echo unit which was named the EVO-1.

The Lubow brothers designed other products besides the echo unit and the Morley Pedal. On their list of inventions were devices like Phasers, distortion units and Flangers. The Lubow brothers also manufactured the Pik-A-Wah pedal, Echo Chorus Vibrato, and the Chorus Flangers or CFL.

Morley pedals sold in volumes in the 70s. However, enter the 80s, newer guitar pedals emerged from rival companies. These pedals gave a crisp sound with the added advantage of being less bulky. To level the competition, the Lubow brothers redesigned the Morley pedal. The treadle and housing shrunk in size while the chassis was painted black.

Raymond and Marvin Lubow pioneered the history of the Morley Guitar Effect Company. Their ingenuity is still appreciated today in the advanced Morley pedals and other sound effects products by the same company.